I had my birthday at Gunung Jerai, Kedah in February 2010. Special day with special person...

There is only one accomodation you can find in Gunung Jerai - The Regency (formerly known as Peranginan Gunung Jerai Resort). It was renovated and reopen in 2010.

We had ourselves a standard twin bed room. The view from balcony is awesome as we can see the long stretches of paddy field which you can't even see the edge of it. Unfortunately, the time that we went there, the paddy was harvested and field burning was in progress. So, do check the season before your visit. 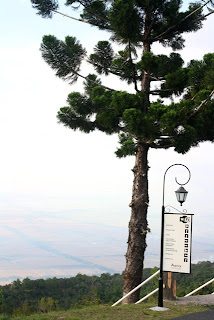 The room is not very big, but clean and new with balcony, all facilties work well. As a RM180 standard room, I think it's how it should be. For chalet in Jerai, I think the view is surprisingly not as good as the standard room. 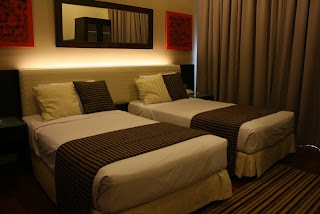 The restaurant in The Regency is the one and only one restaurant in Gunung Jerai. The food is expensive and tasted so-so, cost around RM10-RM30, not worth for a try I can say. 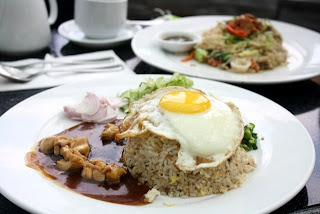 Not sure chalet allow to cook, do check it with the management.
It was funny as things really really did not go well in this trip. There were 2 attractions in our list for Gunung Jerai, waterfall and museum.

On the day we reached there, we found that the Forestry Museum was closed down for quite some times already. It was kinda disappointed. And then we went to waterfall, the entrance located opposite the museum, short trek down hill. We saw the waterfall....but... without water on it.... =.=!! There's a season for waterfall too??
We walk further down and came to the recreation park, it was abandoned and scary. We didn't walk further as it felt unsafe.

There's another waterfall nearby the hotel, but it only allow to go with the tour guide from the hotel. As we only have two person, we gave up that plan eventually. There are several trails which we not manage to try out too.
However, I still enjoy my trip very much. There are so much more than a trip.
﻿ ﻿

How to get there:
Drive along North-South Highway heading to Alor Setar. Exit at Gurun.
After exit you will see signboard along the way that took around 10-15 minutes lead you to the foot of Gunung Jerai. Drive less than 30 minutes then you will come to the resorts' doorstep.
My Proton Saga BLM 1.3 enough to handle the sloop.

Weather:
Daytime: Casual without sweater
Nighttime: Light sweater might needed at outdoor
Posted by 伸 at 7:04 AM 1 comment:

Email ThisBlogThis!Share to TwitterShare to FacebookShare to Pinterest
Labels: Kedah

Decided to record down the footprints in my life, I created this blog, just to give myself a chance to make my travel memorable and keep those precious moment forever.

I will begin my travel blog with my visit to Trang, Thailand.

One day, one of my colleague asked me, am I interested to go a place call Trang in Thailand. Trang... where the hell is this? Never heard of it. Asked around, still nobody have any idea where is it and what's out there.
But since I already lived in northern region, Thailand seems like a place I must explore, so why not?

And package of RM298, 3 days 2 night (include everything except lunch and dinner), sounds really attractive~
We had a long queue at Thailand Immigration. After 4-5 hours of stuck, we finally stepped on Thailand's ground. The first meal was pretty impressive, I like seeing people deliver our food with boat~ :p 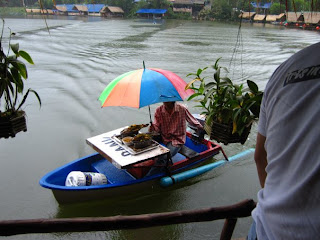 Low-Ceiling Cave (Le Khaokob Cave)
You can't imagine how low is the low-ceiling they mean... You got to see it yourself~ It's really fun and advantures but not suitable for those people with claustrophobia (幽闭恐惧症), a phobia of closed spaces or situations which are difficult to escape from.
﻿
Cave in the Sea
Another attraction is an island on Trang. The boat just bring us to an island and I thought we gonna have some normal snokelling. However, we were asked to queue in one line in the sea, by holding each other's back. The tour guide lead and drag us from front towards the island. There's some spaces beneath the island that allow us to swim over it and eventually leading us to a cave in it. The cave is really really dark where you can't even see yourself! We swim through the cave with only some of them holidng waterproof touchlight. However, it's so crowded in the dark cave. There were many tour group went to and fro the cave. After around 10 mins swim. we saw lights in front. It is a hidden beach beyond the cave! Our line start broken up and everyone can't wait to swim themselves up to the beach... It was real nice~
﻿

One thing I so love about the tour guide, he doesn't talk much. So we actually do not know what do we expect when we enter the cave. Another good thing is we did not being brought to some places that force you to buy things like usual tour package did.
The hotel we stayed was mayb a past 4-star hotel. The facilities are old but still clean and workable. Not too good but not bad either. Most important, we got a comfortable bed and clean toilet. 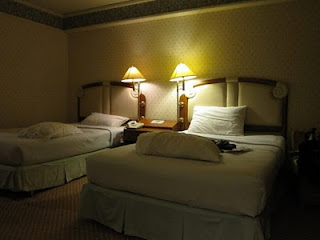 The trip is kinda different from the trip I had before. Exciting and unexpected~