One day in March, we were cafe hunting in Georgetown, looking for a cafe named Fork Mee. Spinning up and down along Lebuh Carnavon, and we finally found it on the 4th round, which it is located at the "golden triangle" where Lebuh Carnavon, Pesara Claiment and Lebuh Acheh meet. The shop was almost close at around 10:30pm that time. I knocked on the door, a Caucasian lady welcomed us and said we could still have a drink if we wanted to.

The shop is run by a couple from Lithuania, which we found out that night, the man that we chit-chat to is the person who drew the old man wall painting on Armenian Street, the first painting that known by us, which he drew for the Georgetown Festival 2011.

This year, 2012 Georgetown Festival, several mural paintings have been popping out on Georgetown streets, naming Mirrors Georgetown. The young and shy artist that we met that night, Ernest Zacharevic, suddenly became a famous public figure. His photos and his drawings,  covered half of my facebook home page.

Being the main painting of Georgetown Festival 2012, the painting of a bicycle with 2 kids on Armenian Street gained lots of attention, lots of tourists, photographers and even penangites joined the fun to pose many funny and "ridiculous" pictures with the painting... :p

Today, I went to Georgetown again for a walk on the festival celebration area, passing by Ernest's mural paintings on Lebuh Armenian and Lebuh Ah Quee, the streets are full of people queuing up waiting to take picture of their own with Ernest's painting.

I smiled, because I feel happy for him.

There are lots of great artists in Penang, and even more around the world. How many of them eventually make up onto a newspaper's front page? I'm glad that Ernest is the one who stand out among them, simply because he is the most humble artist I ever meet.

My photo collection of Ernest Zacharevic and his street arts: 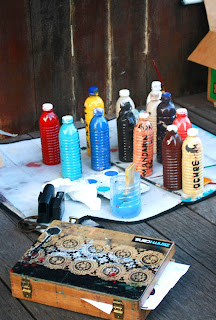 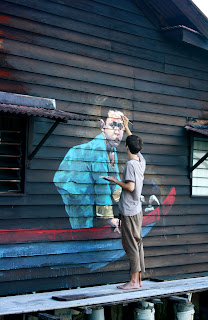 * Fork Mee is hardly open nowadays, mostly because they are busy with the festival, I believe.
Write up of Fork Mee by V's -> Life's Simple Pleasures
Posted by 伸 at 8:14 AM 4 comments: